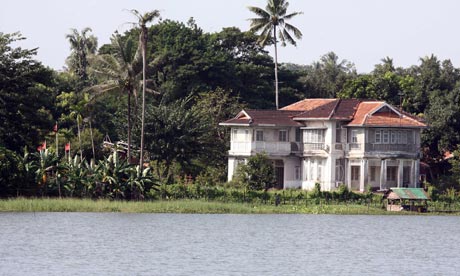 Cameron at a joint press conference with Aung San Suu Kyi.
Your courage has been inspirational for people across the world who want to see democracy, freedom and human rights, he tells her.He says he is committed to working with her to help Burma makes changes.
We must respond with caution, care and skepticism, but he thinks it is right to suspend sanctions against Burma, Cameron says. There are so many things that need to happen. More political prisoners need to be released, Cameron says. It is good there was the set of byelections, but he is looking forward to the general election in 2015.What an inspiration it is to have watched your struggle, he says.Peaceful change in Burma should be hugely encouraging, he says.He also mentions malnourishment and poverty in the country.
It is an honour to stand by her side, he says.

Aung San Suu Kyi says it is absolutely the right time for Cameron to come.She says she feels the president, Thein Sein, is genuine about democratic reforms.I support the suspension of sanctions rather than the lifting of sanctions, she says.I am very, very happy to welcome all of you, not just the prime minister, to Burma, and as this is the time of the water festival, it is a good opportunity to wash away all your sins, if you have any, she says.She says she hopes this new year, starting on 17 April, will bring democracy to Burma and closer cooperation between Burma and Britain. Aung San Suu Kyi is asked about the disappointments of the past. She says they were not disappointments, they were setbacks; she and her colleagues had to take risks then, and they have to take risks now.Cameron says he can't speak for the regime to say why they are opening up now, but he notes that in Burma's neighbours democracy and economic growth are going hand in hand.There is much more we need to do - we will keep that pressure on, he says.
If we really want to see freedom and democracy in Burma, we should respond when they take action, Cameron says.

Cameron is asked if suspending sanctions removes the pressure on the government to keep reforming.
I think it's right to respond positively to the steps the president has already made, Cameron says.
But suspending the sanctions rather than lifting them is the right thing to do, he says.
Let's not forget how far things have come, he says. We are standing in a house where you were under house arrest for decades, he says, addressing Aung San Suu Kyi.

Prime minister is first western leader to visit Burma since Aung San Suu Kyi's success in parliamentary byelections.David Cameron meets pro-democracy leader Aung San Suu Kyi at her lakeside home in Rangoon, Burma, today. David Cameron hints at desire to lift Burma sanctions.Cameron says when the EU sanctions come up "for ending" in April he will argue that they are suspended.That should cover everything except the arms embargo, he says.Let me be clear, he says: there is still much, much more that needs to be done. We know what a long road needs to be travelled between now and 2015, Cameron says.
Media agencies
Posted by Nksagar at Friday, April 13, 2012