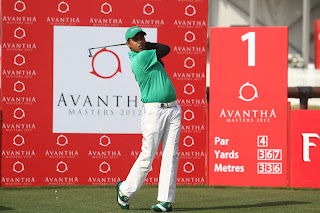 Bangalore golfer bags second international title
New Delhi, February 25, 2012: India’s Anirban Lahiri outclassed Prom Meesawat of Thailand in a playoff at the Delhi Golf Club on Saturday to lift the SAIL-SBI Open 2012 trophy. Lahiri, who emerged triumphant on the first play-off hole, became the first Indian to win the SAIL-SBI Open.
Anirban Lahiri (65-69-67-73) and Prom Meesawat (72-64-68-70) had ended the regulation 72 holes with matching totals of 14 under 274 after Lahiri had fired a one over 73, punctuated by four birdies and five bogeys, and Meesawat shot a two under 70 in the final round. The two players thus headed for a play-off on the 18th hole.
Prom, who had overcome a three-shot deficit to take a share of the lead with Lahiri from the 16th hole in regulation play, hit his tee shot at the first play-off hole into the bushes on the right.
He had to take a penalty because of an unplayable lie and played the third shot to the left of the fairway from where his fourth shot just found the green, which left him with a 40-foot putt for par.
Lahiri meanwhile had a good tee shot and managed to reach the green in three. He came within three feet for his birdie putt. Prom then decided to pick up his ball and concede defeat.
“I’m disappointed with the way I hit the ball as I’ve hit it much better the last three days. I found two bushes today which I had to chip out and that was something I haven’t done all week. I also dropped five shots which is not something you can get away with at this golf course, especially on the final day,” said Anirban, who bagged his second international title on Saturday.
He added, “I’ve changed my mental attitude towards golf. Practicing meditation has helped me stay in the moment. I was trying not to get ahead of myself and that was one of those few things that helped me to execute things rather than project and think into the future.”
Australia’s Scott Barr looked set to for a grandstand finish until a disastrous triple-bogey six on the 17th hole put paid to any hopes of a maiden win. The Singapore-based Australian had to settle for third place on 275.
Ben Fox of the United States closed with a 278 to take fourth place while PGTI member Md Siddikur Rahman of Bangladesh was a further shot back in fifth place on 280.
Shankar Das (74-69-70-68), Ashok Kumar (74-68-69-70) and Gaganjeet Bhullar (68-69-70-74) had the next best finish among the Indians as the three of them shared sixth place at seven under 281.
“Golf is fast on its way to become a common man’s sport in India given the wide popularity it is enjoying amongst masses”, said Union Minister Subdh Kant Sahai, Union Tourism Minister at award presentation ceremony of SAIL-SBI Open, a major international golf event sponsored jointly by SAIL, SBI and Ministry of Tourism.
“The Ministry of Tourism will do everything to support the game of golf and increase golf tourism in the country. We need to build more courses across the country and make the sport accessible to many more sport lovers”, Mr Sahai added.
Anirban Lahiri won the event and became the first Indian to win the SAIL-SBI Open in the five year history of the event. Prom Meesawat from Thailand and Scott Barr from Australia were the first and second runners up respectively.
Mr C. S. Verma, Chairman, Steel Authority of India Limited (SAIL) said, “We are glad to have once again staged this annual international event, which promotes sporting culture in the country. With SAIL increasing its global footprint steadily, we are happy that this event attracted participants from over 20 nationalities and an Indian has clinched the trophy this year.”